More info here, or see below: 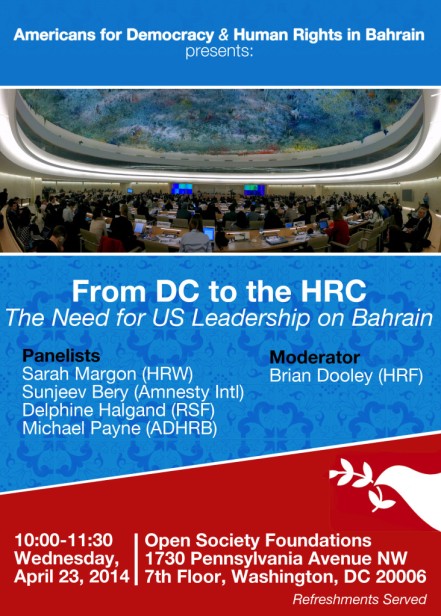 Under the Universal Periodic Review, every country in the world goes through a human rights review by its peers in the United Nations.  How has Bahrain fared under its review?  How well has Bahrain’s government implemented the recommendations of governments and civil society?

On Wednesday, I will get into the details when it comes to this repressive ally of the United States.

US President Barack Obama left Riyadh on the afternoon of March 29 apparently without raising human rights issues during talks with Saudi officials. The trip came at a time when Saudi Arabia has scaled up its persecution of peaceful dissidents and human rights activists – including one who is expected to receive a long prison sentence next week; deported thousands of undocumented migrants who have been detained in terrible conditions; and continues its systematic discrimination against women.

Although billed as a “fence-mending” trip, it is hard not to wonder what it would take for Obama – or any senior US official – to shed some light on these pervasive abuses.